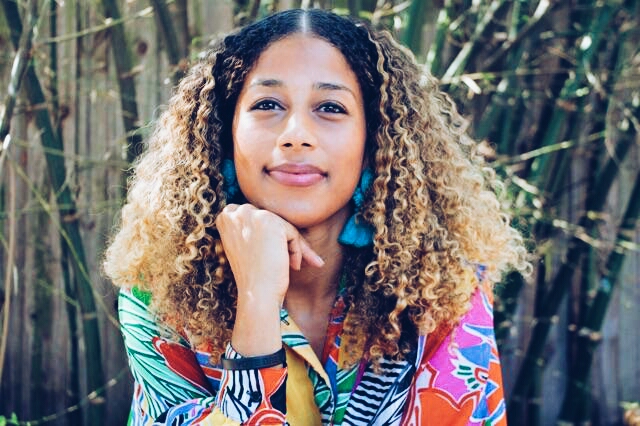 Aja Monet is a Caribbean-American poet, performer, & educator from Brooklyn. She the youngest person to win the legendary Nuyorican Poets Cafe Grand Slam title and a recipient of the The Andrea Klein Willison Prize for Poetry, established to recognize poetry that effectively examines relationships among women. As Co-Founder of Smoke Signals Studio, Aja dedicates her time merging arts & culture through community organization with the Dream Defenders and Community Justice Project.

I am a woman carrying other women in my mouth.

Behold a sister, a daughter, a mother, dear friend.

Spirits demystified in a comrades tone.

They gather to exhale breathe a dance with the Death we know is not the end.

All these nameless bodies haunted by pellet wounds in their chests.

Listen for us in the saying of a name you cannot pronounce.

Black and woman is a sort of magic you cannot hashtag.

The mere weight of it, too vast to be held.

An inheritance felt between the hips.

Watch them envy the revolution of our movement.

We break open to give life flow.

Why the terror of our tears, torment of our tastes.

My rage is righteous.

My love is righteous.

My name be righteous.

Hear what I am not here to say.

We too have died.

We know we are dying, too.

I am not here to say, "Look at me. How I died, so brutal a death I deserve, a name to fit all the horror in."

I am here to tell you how if they mention me in their protests and their rallies, they would have to face their role in it, too.

I have died many times before the blow to the body.

I have bled many months before the bullet to the flesh.

We know, we know the body is not the end.

Call it what you will.

But, for all the hands, cuffed wrists of us.

The shackled ankles of us.

The bend over to make room for you of us.

How dare we speak anything less than, "I love you."

We who love just as loudly in the thunderous rain.

As when the sun shines golden on our skin and the world kisses us unapologetically.

We be so beautiful when we be.

How you going to be free without me.

Your freedom is tied up with mine at the nappy edge of our soul singing for all our sisters.

Watch them, watch them stretch their arms in my voice.

How they fly open-chested toward your ear.

We are each saying we do not vanish in the bated breath of our brothers.

Show me, show me a man willing to fight beside me.

My hand in his.

The color of courage.

There is no mountaintop worth seeing without us.

Meet me in the trenches where we lay our bodies down in the valley of a voice.

Say it, just say her name.

[applause] Aja Monet: This poem is called Give My Regards to Brooklyn, and this is the Brooklyn I knew before the Brooklyn that currently is. On the humble, I'd be having these dreams where I'm people watching with Basquiat, sitting on a curb on Bedford Ave, sipping piraguas, talking about, never thought I'd live to see the day. Could have sworn I saw Otis Blackwell walking out the corner store in Atlantic Ave, smoking a Lucy, whistling a new tune for Elvis to cover, and it was gully right because I caught Biggie on a stoop in bed stuy selling dope to a hipster with "ready to die" tatted across the pale of his arm. Hadn't seen a hoopty in a while when old dirty bastard pulled up offering me a ride to the pink houses and suddenly a handsome mocha man sitting on a nearby fire escape calls my name. I could tell it was Jackie by the Dodgers stitched across his chest. He told me, "I miss home," and then it all fades to black. When I woke, the blue moon was sprawling out from its hiding place, limbs hanging over the shoulders of night after lovers had abandoned their bodies laughing in the corners of each other. I was a Fulton lamppost staring at the sky's cheekbone, shy of stardust to the blinds of J train tracks. This is how it feels to dream of being moonlight in East New York. A concrete plant collecting whispers of bodega blues, darling sunrise tickles drumbeat hips swaying through the air of Sazon, and I envy the morning's swag. Boom boxes hold our windows open in July. We face our fears on the cyclone called romance, a stroll along the boardwalk in Coney Island. Head nods pay respect on beat boys playing skully in the street. We used to buy our kicks from City Line and roll a blunt for our fallen soldiers and spark a generation in love with spray cans and naked tenement buildings. Graffiti, the spirits of hustlas with bubble letters. Mr. Softee Summers meant stealing abuelas Santo offering for Tweety bird on a popsicle stick playing hopscotch on a broken sidewalk, eavesdropping on front stoop gossip, hair braiding, fingers dancing between strands of air. Brothers get caught in gangs, get caught in barbershops, get caught in street corners, get caught, thrown against the hood of cop cars, seen one too many handcuffs on the wrists of brown and black skin. We dock slave ships on our shores daily, know Rikers island like a country home. I'm convinced my father conceived me in King's county arraignments while daydreaming of freedom. I owe my life. I owe my life to the woman who stopped my mother on the B56 on her way to the abortion clinic and told her, "You have a poet coming." [applause] [00:03:12] [END OF AUDIO]

Dr. Jane Goodall's Hope for the Future of the Planet

Dr. Gabor Maté on Having Sympathy for Trump and Healing an Insane Society

Uncomfortable Truths About Being a Great CEO: A Conversation Between GaryVee and Michael Ovitz

Allen Stone performs "Bed I Made" and "Love"

More talks and performances to come.

Not yet a Summit Community member? Join us.